Subscribe to The Front Page to get an email every time we post a new article. You can unsubscribe at any time, so no pressure.

A Conversation With Dr. Colleen Simpson

Student Debt Forgiveness: Are You Ready?

Joshua Monen dives into the details of student debt forgiveness to help you get ready for relief. END_OF_DOCUMENT_TOKEN_TO_BE_REPLACED

Welcome to our Newest Member

Something went wrong. Please refresh the page and/or try again.

Until 1:30, there are therapy dogs in the in the library for the second edition of Paws to Destress!
With the whinier break almost upon us, why don’t you carve out some time to check out the latest cult movie you have never heard of? Joshua Monen goes into the phenomenon that is… RRR.
FRCC students start to get a little... antsy during finals week.
FRCC'S student life team gets a lesson in self defence!
Come get your free hot chocolate near the SOC before it’s all gone!
We live in stressful times, sometimes we can’t get away from it. The Front Pages Joshua Monen sheds a light on the practice of regulation of stress on social media.

52 years ago, the front page of The Community Free Wake, predecessor to The Front Page, was covered in articles and images about the shooting at Kent State University. This is a transcription of that page. It is best viewed on a desktop computer.

To Those Who Are About To Die, We Salute Thee.

GIVE PEACE A CHANCE

The sun was just beginning to burn its way through the early mornings haze as the first real signs of activity started in the court yead[sic] between the buildings.

The Planning Committee for the May 6 War Crisis Day, appeared on the scene, setting up tables, chairs and a public address system on the west side of the east building. Inside, last minute “button-holing” was taking place, as a student organized marshall corps was making last minute adjustments and donning red arm bands.

Slowly, at first, people began to make their way to the grassy area. filling the center section first and then, as more people in larger groups arrived, spilling over into the two side areas. Some preferred standing or kneeling on the sidewalks, and did so, carefully leaving space open for free flow of traffic between the buildings.

At about 10:15. Phil Elliot, moderator for War Crisis Day discussions, announced that the speakers who were coming in from Boulder would be a little late. He urged students and the faculty members present to round up their friends, make themselves comfortable on the lawn, and feel free to take advantage of free coffee and donuts.

The atmosphere, though at first was one of guarded curiosity, was of a friendly affair, completely lacking in any feeling of hostility, bul certainly not lacking in serious contemplation.

After about ten minutes Phil returned to the speaker’s table and announced the first speaker, Neil Sale.

And so the official speech making began. John Hillson, the assistant editor of the C.U. DAILY, received a warm welcome and roused interest in the crowd. Dr. Roger Paget, after giving some interesting background information on Vietnam was interogated[sic] on his action beliefs by a member of the crowd.

The last official speaker of the day was Richard Gebhardt. He delivered his speech with the finesse of an expert. One remark overheard in the crowd was: “If you have a whole series of speakers and don’t tell the audience anything about them, they can always pick out someone who has worked for or with a Kennedy.” Probably the statement is right, for Mr. Gebhardt worked with Bobby Kennedy — his speech had that same thrilling. rhythmic explosion of sound and emotion so typical of the Kennedy magic.

Of course while some students were Sitting in a quiet respectful manner, listening to experts and politicians tell their story — other things were happening. Inside the guileing[sic] the student center was not quite as full as usual, but then that could have been attributed to

the fact that classes were canceled for two hours. A conversation heard in the halls consisted mostly of a man (about 40ish) repeatedly telling a woman that the students “Don’t know what’s going on.”

That statement brings out the most important point possible in regard to May 6 at CCD. The students-themselves, by calling in speakers to give information and facts instead of only opinions, were the first to admit that they didn’t know everything about what’s going on. (For that matter, does anyone, really?) The next best question to answer is What brought it about? Why did 15 to 20 students gather together four well- informed speakers and run-off stencils and bring together about 150 students (in a transient type of group?) Perhaps the best answer to that question is answered by the answer to another question: What did it accomplish?

The answer sounds like this: If with all the talk and questioning, one person, just ONE, did some honest thinking for himself, it was worth it all. Because that’s what its all about; about people who become involved, no matter what side they’re on; people who think (or themselves and stand up for what they believe to be right; about people who see apathy for what it is — a sickness which spreading in epidemic proportions across America — and must controlled and cured before it kills us.

It’s a dark and pleasently warm night. The sun just set and the sky is like a huge skyrocket, burst and fading in a canopy of gold and pink over the mountains. A small breeze just blew in an open window and restled a couple of un-read papers on the desk, calling my attention to the headlines proclaiming in two inch print that the president is sending troops to Cambodia and four students have been shot to death in Ohio.
It’s a sadly ominous feeling that dwells in my mind as I sit here writing this tonight. A feeling, a helpless feeling that my time is drawing near.
When I think about it, I guess I’m ready to accept death and if I have been chosen to die by cause of this absord parlour game we call war, it won’t be in some God-forsaken Asian country, it’ll be in my own backyard. I’ll die for my beliefs, my strong beliefs in the war against war.
If I could but turn the clock back to that afternoon at Kent University. I would eagerly trade my life for those four students who never asked to lose theirs. IS PEACE REALLY A FOUR-LETTER WORD?

A Face In The Crowd

On May 4, during a demonstration at Kent University four college students were shot to death by the National Guard of their own country…National Guard troups[sic] who are sworn to defend the constitutional rights those four students were exercising.

What is America coming to? What, when people such as the Guard, some of whom might have even had children in that crowd— are killing their own student population? What can it mean, when those who are appointed to protect life are playing “god” and taking it?

Some people have gone so far an to say that those four students got “what they deserved.” wonder how different those reactions would be if one of those four students bad been their son or daughter or neighbor next door. Which reminds me of an old “hitting people phrase about where it hurts” -its a shame that Americans are so apathetic and lack so much in human compassion that they won’t even

stop for a brief instant and just think about why four students died.

Those four students died living and defending an America they could see for the future. They died every bit as patriotic as every GI that has ever died on any foreign battlefield.

Let’s see to it that those students did not die in vein[sic], let’s continue to light for that dream or a new tomorrow, that’s what they would have wanted. R.I.P. – Another face in the crowd.

The sun shone bright and warm on the steps of the State Capital Building. A busy hum could be felt rather than heard. A small crowd of people were milling around waiting for the first signt of peace marchers. The day was Saturday, May 2, the march was the first in a week of protests and tragedies.

There was almost a holiday atmosphere, and I heard someone say “It’s a great day to be outdoors, even for no purpose at all.”

A group of middle aged, middle class people, who had originally planned to march, but decided they were too old to fit in with the younger group, stood basking in the sun.

One of the group came over and started rapping with me. “I’ve been called a Communist for many years, now because of the views I hold”, he told me, “but I have still have these”. He pulled out his Army Reserve card and American Legion membership card. “I’ve given many years to this country, and I love it, but I can’t sit back and watch it go to ruin.”

Someone in the crowd shouted, “Here they come!” There were nearly 100 men, women and children marching across the lawn shouting “Bring the troops home now!”

“I couldn’t help feeling a certain pride in those who dared defy the “establishment,” and an equal pride in a country which would permit them this action.

This feeling was dimmed, however, by the reports of an incident which occured when a man from the sidelines began manhandling one of the marchers. Suddenly every police officer in charge of guarding the supposedly “vicious mob of subversives” disappeared with the exception of one bike-bound bigot who suddenly lost his senses of sight and humanity. A young girl ran up to him, begging him to stop the hassle before it turned into a serious incident for which the marcher would be solely blamed. Even when the officer deigned to turn and look, he simply sat and watched.

When the crowd was seated, the speakers took over. THe sound equipment was sadly inadequate, and unfortunately, so were the majority of the speakers. The Cambodian invasion was spent in dredging up old, albeit valid, gripes about everything else including sideswipes at various factions of the peace movement itself.

I had the feeling that the point of the march had only partially hit the mark. By the time this issue is distributed, two more marches will have taken place. It is my sincere hope that they will be a fitting tribute to the students at Kent University, six at last count, who gave their lives tragically for a cause that seems hopeless. 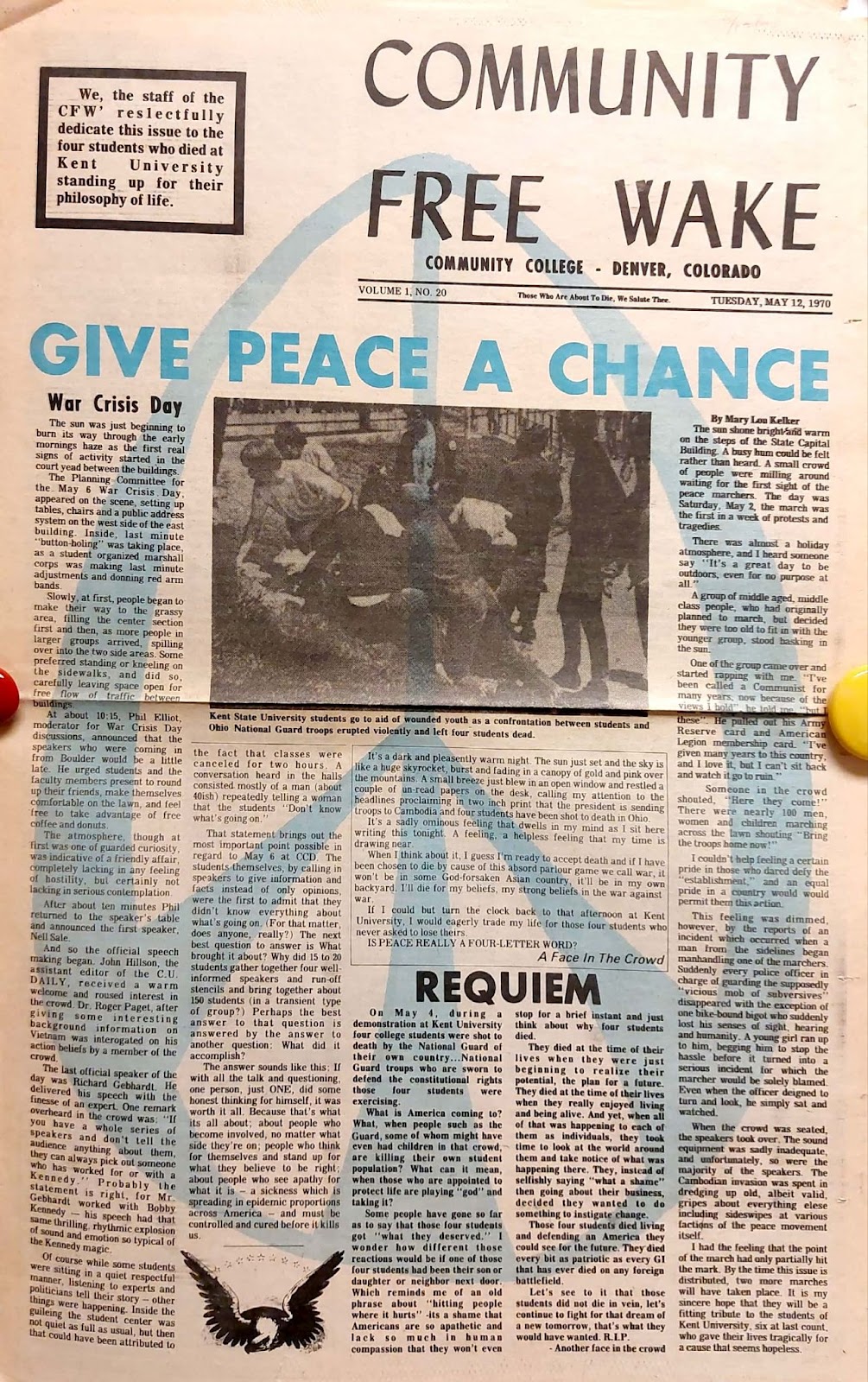 View all posts by frccarchives