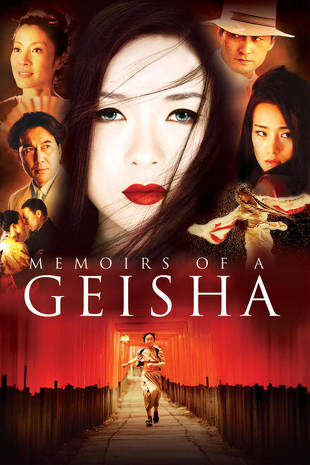 People expect Japanese-themed movies nowadays to be either a comedy, such as Adrift In Tokyo, or anime, like Howl’s Moving Castle. Not many people expect Japanese movies to take place during the 1920’s; however, Arthur Golden decided to write a novel, which dived into the world of geisha.  Director Rob Marshall and screenwriter Robin Swicord made Golden’s imagination come to life in the heart-wrenching movie Memoirs Of A Geisha.

The movie follows the life of a young girl named Chiyo Sakamoto, played by Zhang Ziyi, who worked her way up to become one of the top geishas in Kyoto, Japan, in the transition period of World War II.  The term ‘geisha’ is often misinterpreted as prostitutes; however, some of the first geisha were men called taikomochi or houkan.  The houkan were essentially jesters to feudal lords who advised and entertained them.  Women geisha also began as entertainers who focused on the art of conversation, dance, and music for social gatherings.

Chiyo and her sister were sold to separate geisha houses, okiya, in order for their family to have the money to cure their dying mother. At first, Chiyo is decided by the women she is sold to, to begin following the path of a geisha. Chiyo, still upset that she has been separated from her sister, attempts to run away but is caught by her okasan, the owner and mother of the geisha house, losing her chance to become a geisha and is instead demoted to a life of servitude to pay off her cost.

After some time, Mameha, played by Michelle Yeoh, as seen in Crazy Rich Asians and Guardians of the Galaxy Vol. 2, who is one of the most renowned geisha in the same geisha house takes interest in Chiyo and decides to train her as her apprentice. Mameha taught Chiyo everything she knew of how to become a geisha and helped her obtain a patron.

The audience learns the lessons, training, and dedication that it takes to become a full-fledged geisha during that time period, as well as the hardship of competing with other girls for recognition. While the film mainly focuses on Chiyo and her journey to becoming the best geisha in Japan, it also shows how people were affected by the war. The film shows people having to leave their homes and give up their belongings, as well as how America began to westernize Japan, along with their traditions, such as geisha.

Cinematographer Dion Beebe, who won an Oscar for this movie, captures attention with the use of frame positioning, colors and more. The visuals and music draws the audience in and keeps you enticed from the beginning until the end. Due to the art of geisha translating to the art of conversation and dance, the director and music supervisor clearly took the time to enhance and meld the music and scenes together. All of the music is arranged in a very traditional style of Japanese instrumentals that only add to the ambiance and theming.

While the movie came out in 2005, not many people have heard of it, be it due to the foreign theme or that the story line itself is confusing. Viewers gave the movie a rating through IMDb of 7.4 out of 10, whereas, critics on Rotten Tomatoes gave it a score of 35%; however, the audience gave it a higher rating of 83%.

This movie is worth seeing for  the educational value, along with the alluring story . The audience learns that geisha spent years perfecting the art form. While geisha were overall respected in society due to the dedication it took to become one, the harsh reality of those who were thrown into that world was less than ideal.

Many of the girls who became geisha were young and sold to the geisha homes and thus were resistant at first. Once educated on what it meant to become a geisha, the girls knew that it was a way to escape their old life and begin a new one filled with respect. The life of a geisha is something that earns a lot of confusion, but this movie finds a way to explain it while hooking the audience members’ attention and keeping it throughout the entire film.